The Devastating Impact Of iOS 14 On Performance Marketing

Apple dropped a huge bomb when they announced their new user privacy regulation at the WWDC (World Wide Developer Conference) 2020, in late June 2020.

I would not be surprised if most marketers are oblivious to what the effects are on their app marketing campaigns with this new paradigm shift. And the ones that are aware of the new privacy regulation are probably ill-prepared when it comes to running campaigns as of iOS 14.

So what exactly is this changing?

In short, as of iOS 14 people will have to opt-in to be tracked in an alarming pop-up consent form, for each app.

If the user doesn’t opt-in, then the Identifier for Advertisers (IDFA) will be returned with a string of 0s. Effectively removing the capability of targeting, measuring attribution, and optimizing based on conversion value. I think it is safe to assume that the opt-in rate will be vanishingly low for most businesses.

The release date is yet to be set in stone but it was cautiously expected that Apple would release it to the public as soon as mid-September 2020.

However, due to the industry widespread unpreparedness, Apple has delayed the requirement for apps to start obtaining permission to track until the beginning of next year (2021).

Prior to the IDFA, advertisers and marketers could measure the effectiveness of their iOS campaigns using the permanent iPhone UDID (Unique Device Identifiers). Because this immutable identifier offered limitless tracking in perpetuity it was not privacy-safe. The IDFA was introduced to marketers instead in 2012 as a replacement.

The IDFA is a central mechanism that underpins app attribution, optimization, and targeting today.

How Mobile Attribution Works Before iOS 14?

We typically use Mobile Measurement Partners (MMPs) to handle this process. The major MMP platforms are Adjust and AppsFlyer. 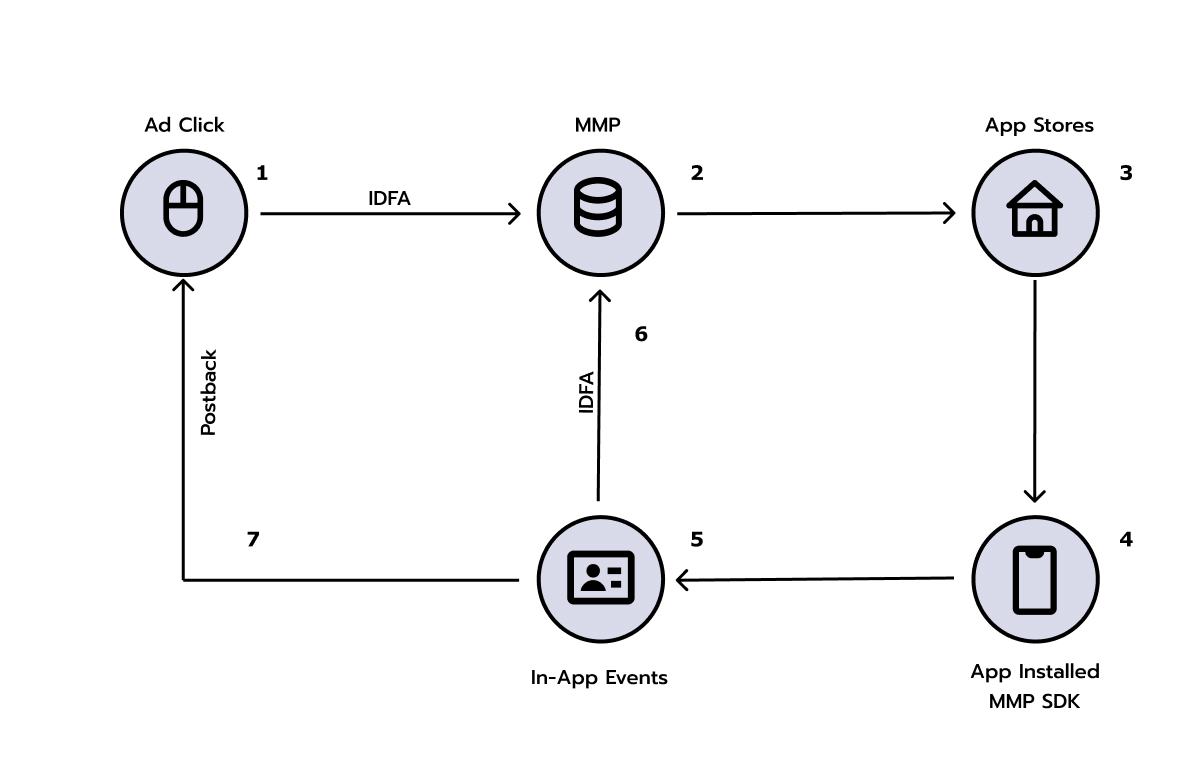 How Mobile Attribution Works After iOS 14

Given that the above-illustrated process will no longer work, unless the user actually does op-in and gift you with their IDFA, you are probably left with a new attribution and tracking framework called the SKAdNetwork.

The SKAdNetwork is practically Apple’s version of an MMP. It is a service that logs clicks from ads and interfaces directly with ad networks to postback attributed conversions. The difference is that it allows for app attribution while preserving privacy. It does so by allowing the advertiser to measure the success of their campaigns on an anonymous aggregated level instead of giving access to detailed user-level data. A bit similar to how you would view your standard traffic reports in Google Analytics. This means that there is no access or drill-down to individual users.

That is not all. Which conversion goal will be sent is based upon which mapped event has the highest conversionValue, within a certain time-span. So you need to think through how you map these in-app events to the conversionValue parameter. For example in an onboarding optimized campaign, you would map each step in the funnel with incremental mapped values. That way, you are sure to send the furthest and the most valuable conversion step.

Finally, we need to consider the aforementioned time-span component. The updated events are determined by introducing a series of timers that must expire before the final updated postback conversion is fired. It is a very convoluted process but in essence, whenever an install is attributed, a rolling 24-hour window is initiated counting down to 0. The timer is reset whenever a conversion event update is triggered. Once the timer hits 0, the attributed postback is passed on to the ad network. Hence, if there is a lag over 24h between two onboarding steps, the latter and potentially subsequent steps won’t be sent as the final postback. This introduction of timers will delay and obfuscate the conversion reporting substantially. We won’t be collecting all conversion of a certain event and we won’t have the data anywhere near real-time.

In summary, iOS 14 will have a massive impact on app marketing. Without IDFA - in-app retargeting, lookalike audiences, and real-time feedback loops - goes out the window. Tools like DSPs on the programmatic side and MMPs will be severely affected.

SKAdNetwork is a life rope in a world without IDFAs but it is a pretty crude one. Marketers need to regardless grasp this rope and start rethinking how fundamentally different they will have to optimize their campaigns as of now.

Cookies and IP addresses allow us to analyze our web traffic, deliver and improve our web content, and provide you with a personalized experience. Learn more
Ctrl Digital may use cookies and my IP address to collect individual statistics and to provide me with personalized offers and ads subject to the Cookie Policy. I can revoke my consent at any time by visiting the Opt-Out page.
[Y]es, I agree] [N]o, thanks]
[X]